“A man with two sons told the older boy, ‘Son, go out and work in the vineyard today.’ The son answered, ‘No, I won’t go,’ but later he changed his mind and went anyway. Then the father told the other son, ‘You go,’ and he said, ‘Yes, sir, I will.’ But he didn’t go. “Which of the two obeyed his father?” Matthew‬ ‭21:28-31‬ ‭NLT‬‬

Jesus was talking to the religious elite here and pointing out that those who were tax collectors and prostitutes, seen as the lowest of the low, were repenting and changing their hearts, and getting on to God’s agenda, much more then they were. He was highlighting that it’s not about just saying the right things and looking the part, it’s about doing the right things and having that change of heart; not just talking the talk but walking it out with Jesus! Thank You Lord, for Your patience with me, for never giving up on me. Thank You that it’s not where I start that matters, but where I finish. Forgive me for the times I have resisted and hesitated in my walk with You, help me to grow in trust and obedience as I choose to wholeheartedly follow you today. Amen 🙏🏼 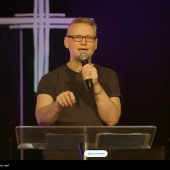